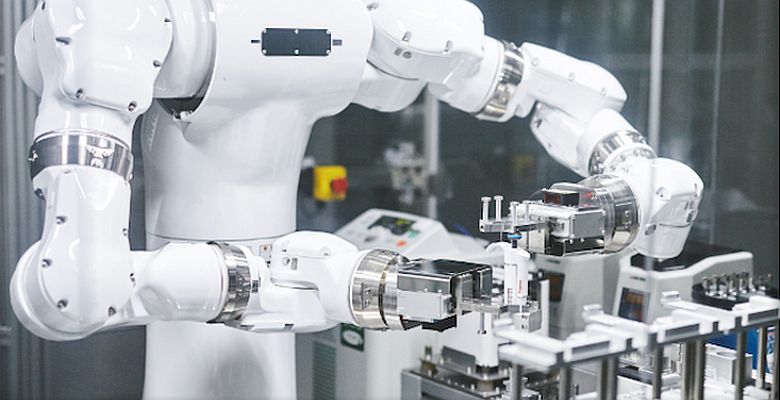 Research in regenerative medicine often requires numerous experiments that are both time-consuming and labour-intensive. Especially the creation of specific tissue from stem cells (induced cell differentiation) requires months of work. The degree of success depends on a wide range of variables.

Finding the optimal type, dose and timing of reagents, as well as optimal physical variables such as pipette strength, cell transfer time and temperature is difficult and requires much trial and error. Minute differences in physical conditions have a significant impact on quality, and because inducing takes a long time, the impact of a small difference in timing on day 3 can only be detected over several months.

To make this process more efficient and practical, the RIKEN research team set out to develop an autonomous experimental system that could determine the optimal conditions and grow functional pigment layers from stem cells. Retinal pigment epithelial cells (RPE) were chosen because degeneration of these cells is a common age-related disease that prevents people from seeing. Equally important, transplanted RPE retinal layers already have some clinical success.

For autonomous experiments to succeed, the robot must repeatedly produce the same series of precise movements and manipulations. The AI must also be able to evaluate the results and formulate the next experiment. The new system achieves these goals using a general purpose humanoid robot (called Maholo) that is capable of precise experimental life science behaviour.

The robot is controlled by AI software that uses a newly designed optimisation algorithm. This determines which parameters to change and how to change them to improve differentiation efficiency in the next round of experiments.

Researchers implement the necessary protocols for generating RPE cells from stem cells in Maholo. Although cells were successfully generated in all experiments, the efficiency was only 50%. Once this baseline was established, the AI started the optimisation process to determine the best conditions between all chemical and physical parameters.

What would have taken humans over two and a half years to complete, the robotic AI system took only 185 days and resulted in a 90% differentiation efficiency. In practice, these cells showed many of the typical biological markers that would make them suitable for transplantation into an eye with a damaged RPE cell layer.

The success of the new system goes beyond the immediate results. The researchers have chosen to use RPE cells as a model as opposed to stem cells. But in principle, combining a precision robot with the optimisation algorithms will make autonomous 'trial and error' experiments possible in many areas of life sciences.

The researchers emphasise that the aim of the research is not to replace human laboratory staff with robots. The scientists' vision is for humans to do what they are good at, which is being creative. Robots and AI can be used for experiments that require repeatable precision and take a lot of time, but which do not require thinking.