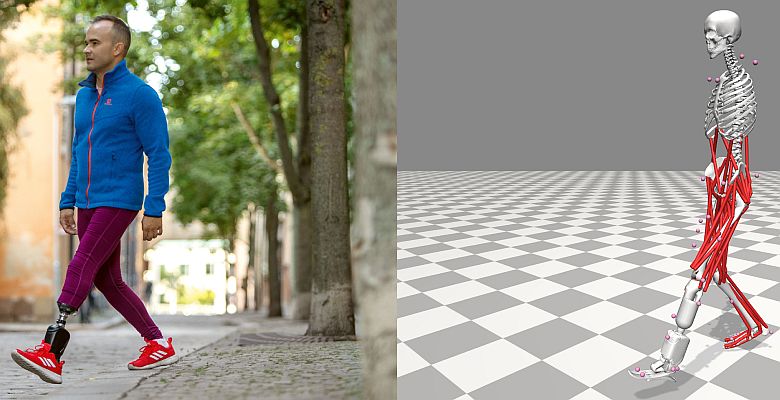 A new prosthesis technology allows amputees to control a robotic prosthesis as a natural extension of their own body.

The University of Twente in Enschede (Netherlands) has developed new prosthetic technology in collaboration with German prosthesis manufacturer Ottobock. The result was demonstrated during the recently held RehabWeek, an international congress for the rehabilitation technology sector that took place in Rotterdam this year. The technology is based on the concept of musculoskeletal modelling and thus differs from the widely used machine learning methods.

Millions of people worldwide have had to undergo amputation of a limb. Despite developments in the field, the functionality of current limb prostheses is still limited.

In humans, movement is initiated by electrical signals sent from the brain to the muscles. By placing electrodes on the skin near peripheral muscles, a surrogate of these brain signals can be recorded as electromyograms (EMGs). The researchers created a detailed digital model of a person's leg and the organic tissues within it. The digital model included an accurate description of the amputee's lost muscles, tendons and joints.

The researchers recorded EMG signals from different locations in the leg muscles. These signals were then used to determine how the virtual muscles in the model would be activated and generate force in the leg joints. The predicted movement forces were then sent to the robotic prosthesis in real time.

With virtual models of the human body, researchers can best predict how humans will interact with rehabilitation equipment. The greatest gains in research on prostheses and orthoses will be achieved by making it possible to control mechatronic devices intuitively and at the same time increasing the user's awareness of all the different situations in daily life. With these results, the researchers are one step closer to achieving that goal.

The research was funded by the EU's SimBionics project, whose partners are the University of Twente, Roessingh Research and Development (Enschede), Ottobock (Germany) and the University of Aalborg (Denmark). The goals of the project include: